Crystal system: Cubic (crystals are most commonly rounded octahedral)
Hardness: 10 (it is the standard for the Moh's hardness scale)
Density: 3.5 gms/cm3
Colour: Colourless, white, pale yellow or blue (other colours occur but are less common).

Diamond is the hardest material known. It can be fluorescent, phosphorescent and triboluminescent. It also has the highest known thermal conductivity.

Because of its hardness it is widely used in industry as an abrasive and cutting material, for which purposes diamond can be made synthetically.

It is found in pipes of deep igneous origin composed of Kimberlite. It occurs in numerous locations world-wide though few are important economically. The richest deposits are in South Africa, Russia, Brazil and Australia.

The specimen illustrated is about 3mm across. Its origin is unknown. 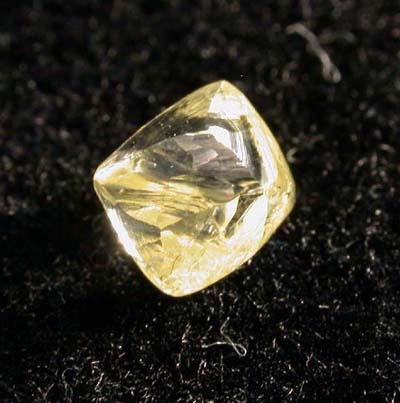