The rocks that we find at the surface are of Cretaceous and Tertiary age (from about 140 to 50 million years ago). They are a thick sequence of sands, clays and limestones gently folded into an upfold (anticline) known as the Weald Dome. Erosion has removed the highest parts of the dome so that we see the oldest sandstones of the High Weald exposed in its centre whilst younger chalks of the North and South Downs form its outer rim. 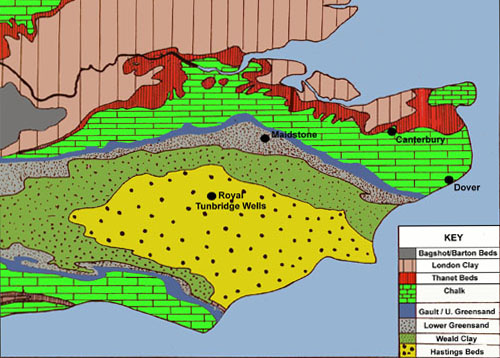 The Kentish rocks begin with fresh water sandstones and clays of the Wealden Series. These were deposited in a subsiding basin to the south of an old landmass known as the London Platform, now buried under North Kent and London. We can envisage shallow gravelly rivers flowing from these uplands, carrying sediment into an extensive area of low lying marshes with ponds, streams and sand banks. Sediments often show evidence of shallow water such as ripple marks, rootlets and even dinosaur footprints if you are lucky!

Eventually these uplands were lowered by erosion, only fine sediment was generated and the basin became a mud plain. Three sandstone/clay cycles can be recognised as the London Platform was repeatedly uplifted and eroded. As the uplift cycles waned an extensive mud plain developed that is preserved as the Weald Clay. Because sandstones predominate in the first and second cycle their resistance to weathering creates the rolling, wooded High Weald. The softer overlying Weald Clay forms the low-lying Low Weald.

The rocks of the Greensand Ridge mark a dramatic change to marine conditions as a shallow seaway was established between the North Sea and the southern Tethyan Ocean around the western end of the London Platform. Initially clays were deposited but gradually sands and sandy limestones came to predominate. Today these limestones, known as Kentish ragstone produce fertile soils whereas the sands give rise to poor acid soils with woodland and heath. Ragstone is beautifully displayed in old quarries around Maidstone, westward towards Sevenoaks and on the coast at Hythe. These pits record the long history of exploitation of Kent's most important building stone. Further pits adjacent to the M20 display the overlying Folkestone Sands also laid down in the seaway and now used for a variety of commercial products.

As we pass from the Greensands down into the Vale of Holmesdale the soils become heavy and clayey. This Gault Clay marks a widening of the old seaway as sea level began to rise dramatically. To see it, go to the coast at Copt Point Folkestone, the traditional place to find ammonites and a range of other Gault fossils in Kent.

Continuing our theme of rising sea level, eventually so much land was submerged that no sediment from land (sand/clay) could reach the Kentish area. Only the skeletons of tiny organisms, overwhelmingly those of calcareous algae, were deposited. They formed the Chalk that provides another fossil collecting opportunity. Today the Chalk forms Kent's most famous landscape features, the North Downs and the White Cliffs of Dover.

At the end of Chalk times (65 million years ago) sea level fell and south-east England was uplifted. This led to wide spread erosion of the Chalk and the non-deposition of the earliest Tertiary rocks. You can see this junction in the corner of Pegwell Bay on the Isle of Thanet. Younger Tertiary sands and clays are preserved on this surface all along the North Kent coast. They are marine and estuarine sediments deposited along the edge of the North Sea about 55-50 million years ago. Their story ends with a thick blanket of London Clay, internationally famous for its plant fossils, which can be seen in the landslipped cliffs of Sheppey.

Finally we have thin yellow sands high up on the Downs east of the Medway gap known as the Lenham Sands. These are shallow marine sands about 5 million years old.

How did they get there?

Their presence suggests either a huge rise and then fall in sea level since that time, or that the North Downs did not exist just 5 million years ago!
Other evidence from East Anglia and around the Guildford area indicates that uplift of the Downs did indeed occur and in the western Weald it was even more recent, starting just 2 million years ago!

The story still hasn't ended as we have one final group of sediments preserved in Kent.
These are the superficial deposits such as river gravels, estuarine muds, solifluction deposits and clay with flint.
They are distributed over the underlying geology but often bear only a tenuous relation to it. Most of these accumulated during the Pleistocene ice age, or soon after, as sea level began to rise. Kent was not covered by ice during Pleistocene cold phases but suffered a tundra-like climate. Under these conditions chalk breaks down to a sludge-like mass which readily flows down slopes (solifluction flows). Coombes cut into the face of the Downs represent scars left by these flows. The chalky deposits can sometimes be seen in fields at the foot of the slope. The uplift mentioned above not only created the Downs but also preserved a whole 'flight' of river terraces along our river valleys that contain a record of Pleistocene climate and the activities of early man.

Eventually the final ice sheet melted and sea level rose. It was during this time that shingle was pushed landward from the previously dry river system of the Channel to create our beaches and eventually another Kent speciality, Dungeness. Coastal changes continue today with cliff erosion, the silting of bays and estuaries enhanced by sea level rise.

An excellent CD-ROM "The Rock Types and Geology of the Lower Cretaceous Wealden District" has been produced by members of the Medway Lapidary and Mineral Society (MLMS). The CD-ROM contains detailed descriptions, chemical analyses and numerous photographs of sites, polished rock samples and thin sections.