When some minerals are exposed to ultraviolet radiation, the electrons orbiting the nucleus can be excited to such extent that they jump to a higher energy shell. This is an unstable condition and when the electrons return to their stable state the excess energy is emitted as light. The colour of the light is determined by the difference in energy between electrons in the higher and lower energy electron shells.

The phenomenon was first noticed in the eighteenth century as a bluish emission from some Fluorites when seen in strong sunlight. The term 'fluorescence' was chosen because of this association with Fluorite.

Fluorescence can be a valuable geological aid when searching for some mineral types in the field. For this reason many geologists carry a portable ultraviolet lamp in their field kit.

Some minerals, such as Calcite and Willemite from Franklin, New Jersey, fluoresce sufficiently brightly for the effect to be seen in daylight. However, the truly brilliant colours of fluorescence can usually only be fully appreciated in the dark.

The ultraviolet range is part of a continuous spectrum of electromagnetic radiation.

The wavelength of visible light ranges from 380 nanometres (nm) for violet light to 780 nanometres for red light. The ultraviolet spectrum has wavelengths from less than 200nm to about 400nm.

The picture on the left shows a spectrum for a spotlight. The scale of wavelength, in nanometres, is just visible as orange numbers above the rainbow colours. Click on the picture to get an enlarged image.

Why is My Fluorite Not Fluorescent?

Some minerals such as Powellite and Scheelite are naturally fluorescent. However, the fluorescence in most minerals is caused by impurities called activators. Thus, unless your mineral is intrinsically fluorescent, it has to contain the correct activator as an impurity. This usually means that it has to have come from a location where that activator occurs as an impurity in the mineral. Franklin, New Jersey, USA and Langban, Sweden are two sites known world-wide for fluorescent minerals. Some proven activators, with their effects, are listed below. 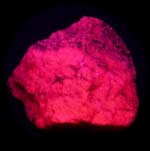 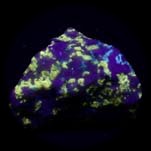 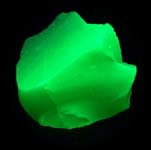