Radioactivity provides geologists with a very accurate method for finding the age of rocks. So what is radioactivity?

In 1896 the French physicist Henri Becquerel was investigating fluorescence when he discovered that some Uranium ore, stored in a drawer, had created a darkened image on previously unexposed photographic plates. The effect was attributed to radiation emitted by the ore.

The name 'radioactivity' was first applied to this phenomenon in 1898 by a brilliant young research physicist Marya Sklodowska (or Marie Curie as she became after her marriage). Marie Curie set out to test all other known elements for the effect and later identified two new elements Polonium and Radium. Radium is many times more radioactive than Uranium and gives off sufficient heat for it to be readily detected. She was awarded Nobel prizes for physics in 1903 and 1911 for her discoveries. Her daughter Irene was awarded a Nobel prize for chemistry in 1935.

The physicist Lord Rutherford tested the radiation's response to an electric field and identified three different types of radiation which he called alpha, beta and gamma rays after the first three letters of the Greek alphabet.

It was later shown that these 'rays' were emitted from the nucleus of the atom. Alpha particles were Helium nuclei (two protons plus two neutrons, having a total positive charge of +2). Beta particles were negatively charged electrons, ejected from the nucleus as a result of neutrons changing to protons. Gamma rays were a very short wavelength radiation similar to X-rays.

Later research showed that radioactivity is the product of unstable elements decaying to a more stable element. Unlike chemical changes which involve orbiting electrons, radioactivity affects the nucleus, changing the element itself. It would seem to be the modern answer to the alchemist dream of converting base metals into gold.

Uranium decays through several stages, all of which are radioactive, to Lead, giving off Helium in the process. Radioactivity is a constant process, repeatedly halving its value in a period, aptly called the 'half-life', that can be accurately determined in the laboratory. It can therefore provide a very accurate 'atomic clock'

Two such processes that are particularly important to geology are radioactive isotopes of Potassium (K) and Rubidium (Rb).

The half life of potassium-40 is 4.5 billion years, very similar to the 4.6 billion years estimated age of the earth. During radioactive decay, a potassium-40 nucleus captures an orbital electron, converting a proton into a neutron, thereby changing to argon-40. Determining the ratio of argon-40 to potassium-40 in a mineral sample can provide a very accurate clock for dating ancient rocks.

Most radioactive materials in mineral collections are Uranium minerals. The Uranyl ion produces minerals with characteristically yellow/green, acicular, crystals that can be very attractive. Some pictures of Uranium mineral specimens are shown below.The Cuprosklodowskite is named in honour of Marie Curie. 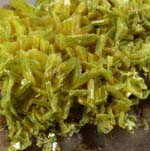 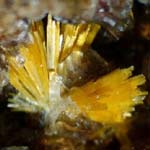 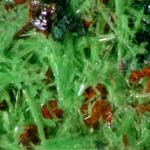 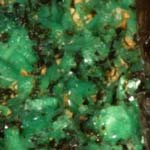 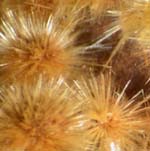 Some scientists believe that there is no level of radiation that is absolutely safe. Others believe that low levels of radiation are actually beneficial. Regardless of who is right, we are continuously exposed to ionising radiation from natural sources; the residual radioactivity of Uranium and Thorium minerals in the rocks of the earth; this is called 'background radiation'. It is generally assumed that a low level of ionising radiation, which over a long period of time damages DNA molecules or control cells, can cause cancer. Skin cancer caused by over-exposure to ultraviolet light due to excessive sun-bathing is an example.

Approximately one in five of us will die of cancer, mostly caused by chemical carcinogens that surround us in our daily lives. The US Environmental Protection Agency estimates that about three percent of those deaths are due to ionising radiation.

No activity is absolutely safe. Even walking down the road can be hazardous.

Potentially dangerous activities are controlled by identifying the associated hazards, calculating the probability that each of those hazards will result in injury or death and then taking precautions designed to reduce the probability to an acceptable level. Some sensible precautions that will reduce the risk associated with collecting radioactive minerals are available through the link below.